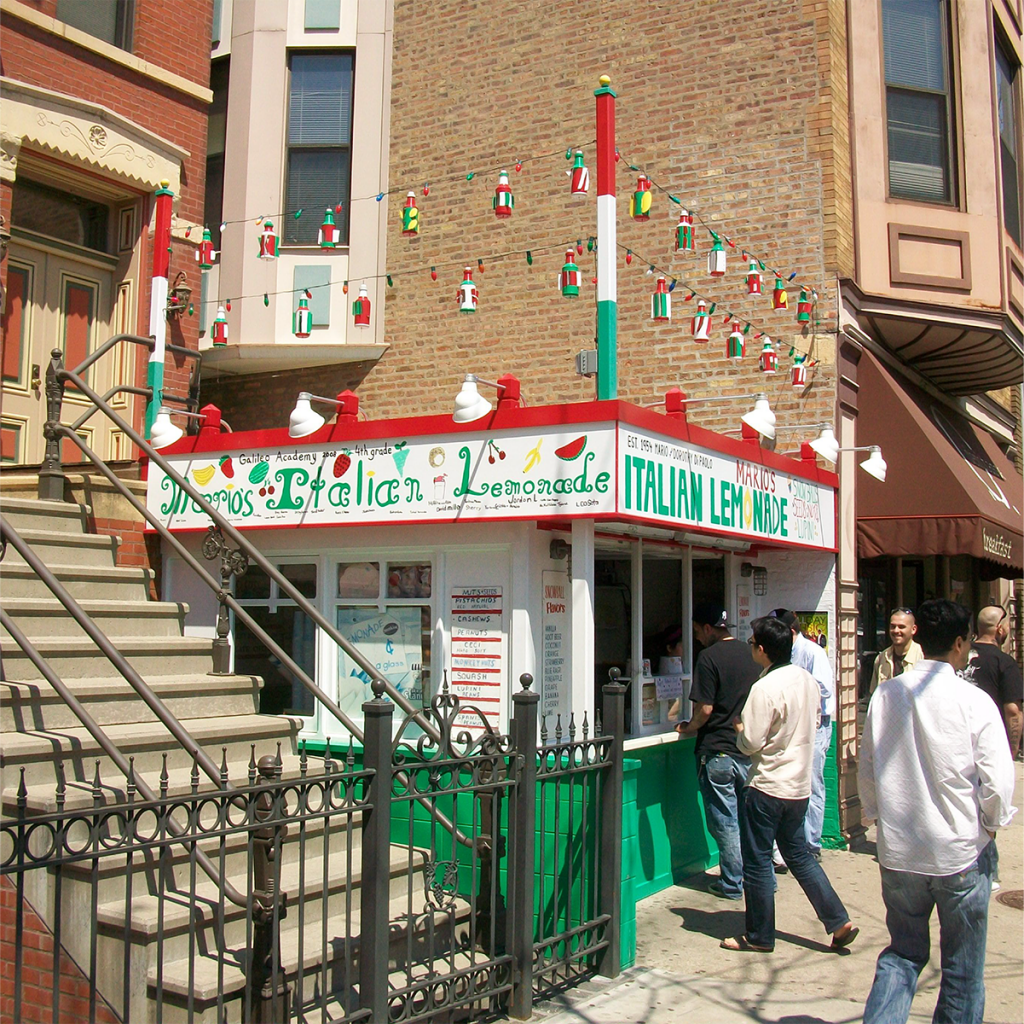 Little Italy is a living legacy of Chicago’s Italian-American past.  The strong Italian influence earned this neighborhood its name.

University Village was known as the Maxwell Street neighborhood after the bustling street that is one of the oldest residential areas in Chicago.

At the turn of the 20th century, Maxwell Street was a part of Chicago’s Jewish community. Vendors set up shops and outdoor markets replicating their life in Europe.  The famous market became known as The Maxwell Street Market.  It was a place where you could buy used furniture, household products, and fresh produce.  In the ’90s, the market was relocated to make way for the University of Illinois at Chicago expanding campus.  Today, street vendors continue the tradition by setting up an outdoor market on Sundays for those who hunt for deals.

Little Italy and University Village are combined into one neighborhood, and they share a zip code.  The area is on the Near West Side of Chicago.  The current boundaries are Ashland Avenue on the west and Interstate 90/94 on the east, the Eisenhower Expressway on the north, and Roosevelt to the south.

Little Italy/University Village boasts eye-catching architecture.  If you take a stroll in the area, you will get an eyeful of the neighborhoods history.  See a statue of Christopher Columbus, made in Italy for the Chicago 1893 World’s Fair, at Arrigo Park.  The Jane Addams Hull-House Museum, The Shrine of Our Lady of Pompeii, The Notre Dame de Chicago, The John Coughlan House, Saint basil and Holy Family Catholic Church-the second oldest Roman Catholic church in Chicago, are a few of the must-see.

Little Italy/University Village is home to many restaurants and shops that have been a part of the community for generations.  The real heart of the neighborhood is Taylor Street.  Along Taylor and Halsted Streets, you will find the area’s central shopping districts.  Retail stores are a merger of local boutiques and national chains.

The neighborhood(s) is home to the University of Illinois at Chicago, infusing the area with youthful energy.  It is essentially a college town, which means that you will find plenty of budget-friendly spots. Pizza, hot dogs from Jim’s Original’s-an old-school 24/7 hotdog stand that started in 1939 boast the original Maxwell Street Polish, and of course Italian beef is plentiful.  You can be the judge of who has the better meat, Al’s, Portillo’s, or The Patio. This neighborhood has its share of upscale restaurants that include Rosebud (Actor, Tom Hank’s favorite Italian restaurant) and The French bistro, Chez Joel.

Conte de Savoia offers mouth-watering choices and has been a neighborhood staple since 1948.  They will stock your picnic basket with bread, cheese, salami, and wine, or a fresh mozzarella sandwich with Italian roasted red peppers and watercress.

It is not summer in Chicago until the walk-up window opens at Mario’s Italian Lemonade.  The cash-only stand has been serving a variety of Italian ice since 1954.

It is safe to say that the neighborhood is not your typical college town however, the bars are plentiful.  Little Italy/University Village has its share of local watering holes.  Visit Little Joe’s, the oldest bar on Taylor Street.  It is a 1946 saloon with an “Italian family basement” decor, basic bar fare, and an easygoing vibe.

Tufano’s Vernon Park Tap has been a neighborhood gathering place since 1930.  They do not have a sign on the door, but once you are in there, you will know that you have come to the right place.

In this neighborhood(s), breakfast gets an honorable mention.

The White Palace Grill has been open since 1939.  It is the finest example of an urban diner in Chicago.

If you are a breakfast fanatic, line up outside in front of The Sweet Maple Café for country-style comfort food.  The biscuits are out of this world.

Students who attend the college take up residence in both Little Italy, and University Village as do many families and young professionals.  However, you will not find many single-family homes in this area.  The area boasts new construction townhomes, lofts, and condominiums.

The median list price per square foot in Little Italy/University Village is $274, which is higher than the Chicago average of $243.